I’ve mentioned many times over the years that I love music, more specifically dance music. When they were handing out the gay, I took a big ol’ helping of disco bunny for myself.

The problem with listening to dance music off my iPod or my PowerBook is that I can’t do anything else while I’m doing it. Let’s face it, I can barely make a a cohesive sentence in normal life ambience, let alone type something witty while I’m jamming with my iPod buds in my ear.

I can not begin to relay the difficulty I’m having typing this blog entry while I’m listening to music at the same time. That aforementioned big helping of disco bunny is having a hell of a time keeping his fingers on the keyboard, let alone managing to type something intelligible. If you left a disco bunny in front of a computer long enough and fed him lots of music, would he be able to type out the complete works of Erma Bombeck, given enough time? It reminds me of the monkey that could bang out a manuscript on an old typewriter, while throwing his poop at the same time.

“Let The Sunshine In (Hot Tracks Mix)”, Army of Lovers.

I downloaded this song from, well, somewhere other than iTunes a couple of weeks ago and then played it up when I DJ’d in Buffalo. Surprisingly enough, the crowd loved the song. The hook is from the 5th Dimension’s song of the same name. While it is missing Marilyn Mc Coo, it’s still a very enjoyable song. If I still controlled a radio station, it would be one of those obscure tracks buried between two Top 40 songs that you wouldn’t hear on any other radio station.

This track came out in the mid 1990s. It was a reworking of the same track from the late 1980s, which was very popular at a bar I used to go to on the Massachusetts-New Hampshire border just south of Nashua. That bar was called “DiRocco’s.” Good fun. This version sucks though, which brings us to …

Did you know that this song originally had TWO verses featuring the male vocalist, Tony Green, who also produced this record. I met France Joli back in February 1997 in New Orleans. I should find that picture and share it.

Oh well I couldn’t find it but I did find an old picture of Earl and I standing in our restaurant! This was taken summer of 1999. 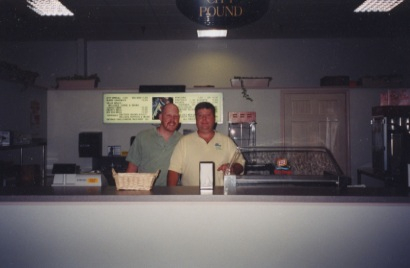 Earl without a mustache! Wow, I don’t remember that. It must not have lasted very long.

Why do you suppose Abba turned down an obscene amount of money about a year ago to do a reunion concert? Do they know how many people are waiting for them to do something together again? Oh well. They must be happy with their current projects.

I’d come up with a witty way to wrap up this blog entry, but I’m too busy dancing around to “The Visitors”. Crackin’ up!