I spent this evening doing a litle maintenance on the TiVo, adjusting our season passes and such. I kept the usual suspects on there, “Judging Amy”, “The West Wing”, “Medium” and “Desperate Housewives”. I like to have one show that records daily so that I have something to wind down with before leaping into the evening’s activities. Lately, I’ve been watching “Charmed”, but I’ve been through the entire syndication offering twice, it’s time to give it a rest and just stick to the new shows. Before “Charmed”, it was “Xena”. Unfortunately, Xena is nowhere to be found on DirecTV these days. I’ll have to get the DVDs.

I really wanted to start watching The Bionic Woman or The Six Million Dollar Man, but alas, they’re not on DirecTV these days either. I think I’m the only person in the world that found Steve Austin cute during his mustache days. His mustache is mentioned frequently on Jump The Shark, and never in a good way. It’s a shame, I thought it was quite handsome.

So after much thought and careful consideration, I’ve found something else for my daily viewing pleasure. 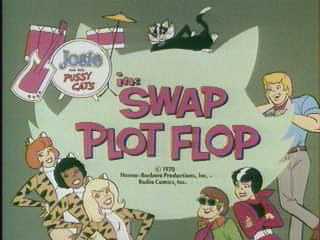 That’s right, I’m watching “Josie and the Pussycats” everyday after work now. You can not deny the fact that Josie and the Pussycats had the best theme song on Saturday mornings, with the original Scooby Doo theme song following a close second, of course. And even though Alexandra has a mean streak in her (not to mention her pre-punk skunk streak in her hair), you have to admit that she has some of the best lines of the series…

Alexandra (watching Josie cuddle up by Alan): “Yeah, and Josie’s the one getting all the thrills.”

Alexandra: “So does Alan– especially red headed ones.”

Saucy! I’m surprised I haven’t seen more Alexandra wannabes at drag shows over the years. She’s an untapped treasure, tha Alexandra. And I must be getting lonely with Earl out of town, but I can’t help but notice that if you were to draw a beard on muscle hunk Alan , he’d be really groovy. You know, it’s pretty sad when you’re lusting after a guy generated by Hanna Barbera. And I’m not usually one to notice blonds. At least I’m not lusting after Jabberjaws.